Welcome to the October Dirty Dozen Christmas challenge. This month's challenge is posted and hope you can play along with us. My creation is using Snow Kissed which was the perfect thought for this months challenge. 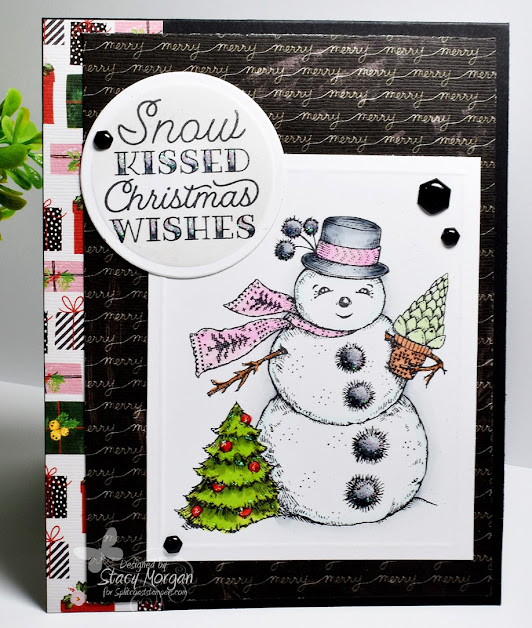 My buttons and hat bombs match the designer paper that I have been waiting to use. I adore the Merry on the black matted paper. Added a little strip of colored paper that brings out the colors in the tree and scarf he is wearing. Sponged the sentiment before I removed the die and added some stickles and enamel dots. Voila!

This Tiger Lily is just awesome and I really do enjoy when I pull it out. Actually I had pulled this out and started the card for the Dirty Dozen challenges in August and never got around to finishing it in time. However it is complete now and I do like how it turned out. 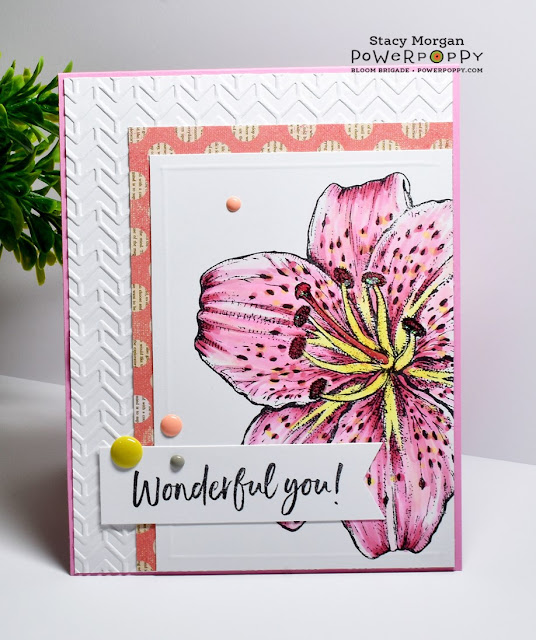 The lily is colored with various Copic markers. A designer paper backing for the main panel with a textured base layer. My sentiment and some enamel dots to finish it off, Voila! Better later than never right? hee hee

Email ThisBlogThis!Share to TwitterShare to FacebookShare to Pinterest
Labels: PowerPoppy

Good morning. Finally all the smoke that we had for the last week and a half blew out and the rain came. Missed walking several times a day as I told my husband. :-)  I had this Plenty of Leaves printed up and never got around to coloring it till a week or so ago. It didn't quite fit the card front but I made a frame to go around it. I think this is why I never ended up coloring it up, oh well. 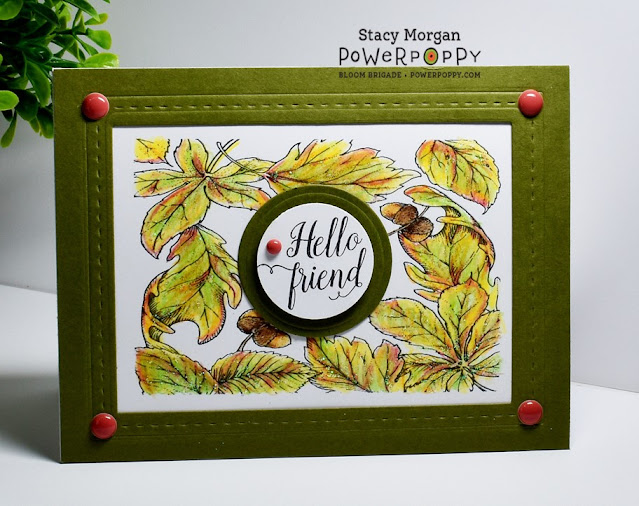 I do like the color of the fall leaves outside and used that as my inspiration. They are colored with various Copic markers. A a stitched border for a frame and my sentiment in the center with some sparkles to finish if off. Voila!

Email ThisBlogThis!Share to TwitterShare to FacebookShare to Pinterest
Labels: PowerPoppy

Happy Friday! Here is yet another sunflower creation that I was sharing about. This is from Sunny Harvest but is in digital version also called Bring Home Some Sunflowers. 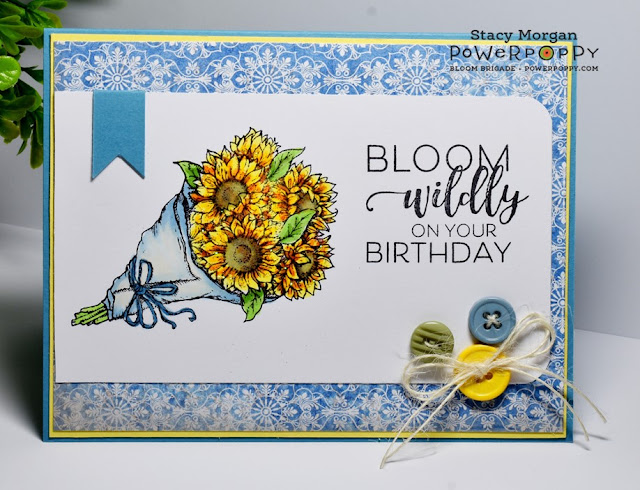 My sunflowers are colored with various Copic markers and my sentiment stamped the right.
I rounded the corners of the image panel and then added a little banner edge. A few buttons and twine and voila!
Check out the Bloom Brigades creations today:
Broni
Leslie

This is a digi that I bought and had yet to print as I find there is quite a few I have printed. I tend to forget about them but can work to print and color later. Might need to do that so they get used.
This is was called Beelieve in Blessings from Sassy Cheryl's stamps. I was going to color his shirt red but I went with blue as I love blue as most know. He is colored with various Copic markers and a simple score around the border. 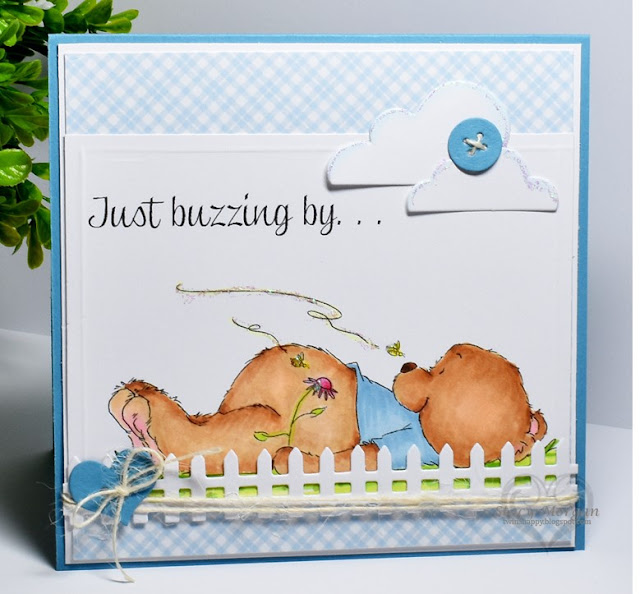 Before I layered him onto the base I added some twine wrapped around the fence die cut and a few die cut heart button shapes to added to the front. Also a few die cut clouds and some sparkle finish this off. Voila! Thanks for buzzing by.  ;-)

Good morning. This weekend I was torn between stamping and cooking up some new recipes and well I actually was able to do both. YEA! The Gordon Ramsey cookbook I got for my birthday has been wonderful. I am 6/6 of delicious recipes so far. Woot woot! Played around in the stamp room with a dusted off stamp set from an old design team. But I do believe this is a Bugaboo Image called Turtles Rain and Turtle Flower as digital images now.
My first card uses some new designer paper that I finally got into and an embossing folder that is starting to become a favorite of mine. Die cut a stitched rectangle around the base layers.  His shell looks like a watermelon like so the coloring was a little fun and different which I think turned out super cute. Added some enamel dots and sparkle to the turtle base layer. Then a button and twine to finish it off. 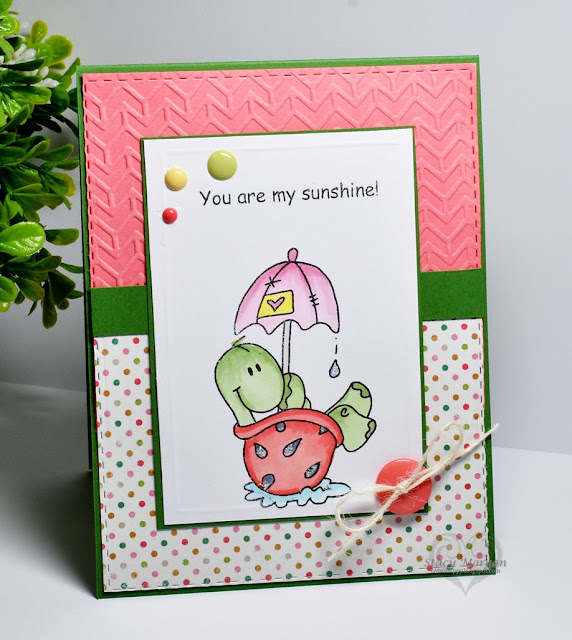 The second is a little more springy feeling with the yellow and daisy's. The designer paper is from a old pack that is almost gone but it matched this little guys shell perfectly. Sparkle was added to the daisy on his shell and the designer paper. Wrapped a little bit of lace trim and some ribbon that is tied off with a button and twine combo for the sentiment. Voila! 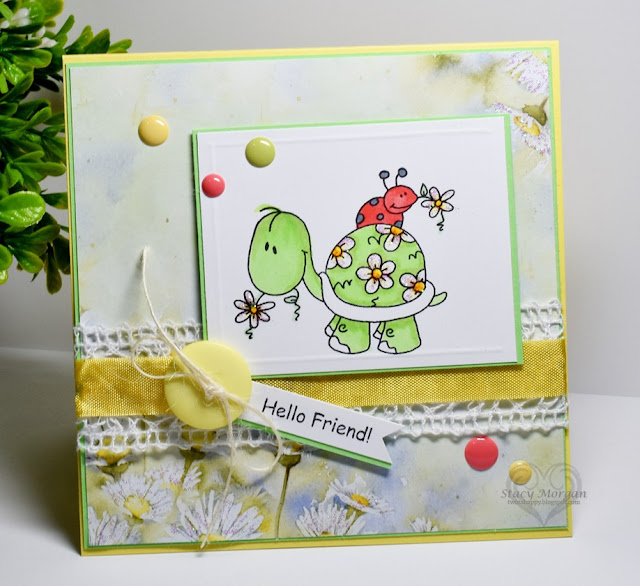 A few more cards this week to share this week along with another sunflower card. I can't seem to get enough of them.  :-)  Thanks for stopping by, have a great day.

Email ThisBlogThis!Share to TwitterShare to FacebookShare to Pinterest
Labels: Copics

Happy Friday! A long weekend with the holiday on Monday. Not sure how much everyone is able to get out this year but make the most of what time you do get out or with family and friends!
Here is another using the stamp set In Praise of Sunflowers that I have been sharing all week. This is one that I had stamped off the edge of the page knowing it was going to be a partial image. I LOVE how this turned out. 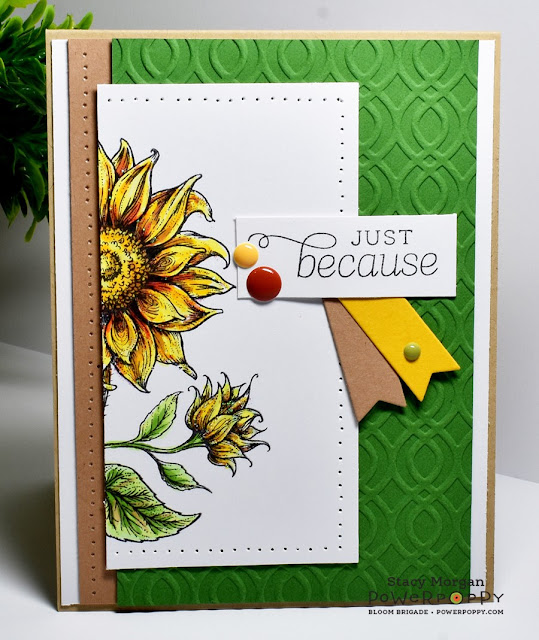 Colored with a variety of Copic markers and pierced around the edge. Same with the base layer and some piercing and textured embossing on the green panel. Die cut a few tags and my sentiment. Some enamel dots and sparkle to finish it off. Voila!
Check out the Bloom Brigades creations today:
Nancy

Sunflower part two for  you today. I mentioned on Monday that I stamped across the length side of a piece of cardstock a bunch of sunflowers. This is one that I kept as the whole sunflower and trimmed down the panel. This sunflower is from In Praise of Sunflowers. 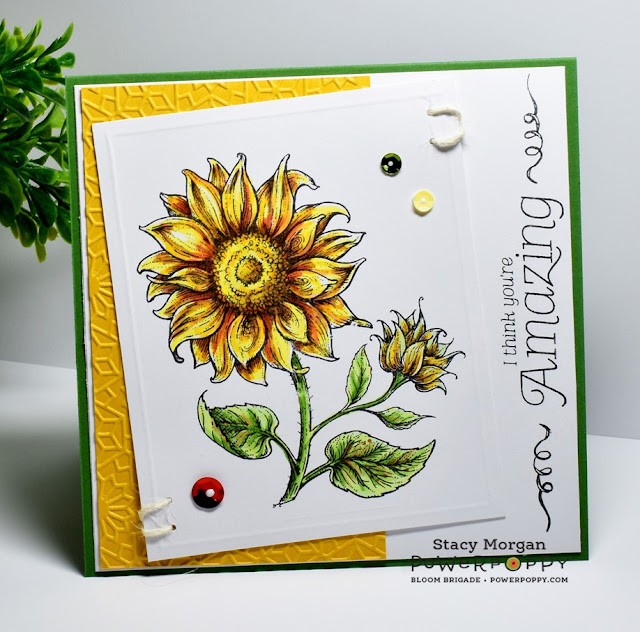 Colored with variety of Copic markers and then scored around the edge. I also punched and wrapped some twine around the edges but that did not turn out quite like I thought it would. Oh well I gave it a try. Added another new to me embossing texture to the yellow base layer behind the image. My sentiment along the side is from two stamp sets the sentiment is from Chrysanthemum XL and Sweet Memories which is currently sold out. Added a few sequins and some sparkle and Voila!
Thanks for stopping by.

Welcome to the September Dirty Dozen Christmas challenge. You can find this months challenge in the forum over on the SCS found HERE . I actually just tied up the last of the 2021 season idea and I am pretty excited for next year. Yet we still have sometime left for our current year, thankfully.
My creation is using the snowman called Snowman with Birdhouse from Serendipity. He is so cute and in the purple hues I think he turned out perfect. 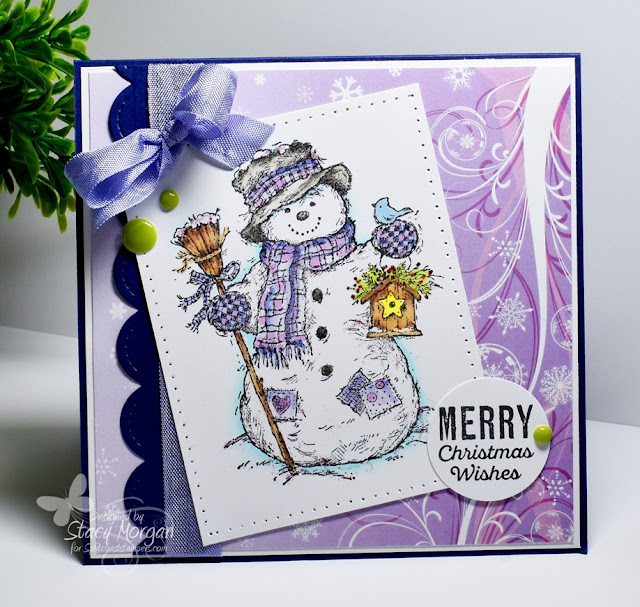 I colored with various Copic marker shades if purple. The base designer paper is from a new pack to me called ODBD Christmas Collection 2019. I like all the purple and blue hues in that pack. Added a scallop piece to the edge and some ribbon with a bow. Pierced the edges of the main panel and added some sparkle and my sentiment. Voila! Hope you can play along with us this month. Have a great day.