Giants Rock! Once again the Giants have beat the Patriots in the Super Bowl! I promised I would get a card ready and mailed to Derek and here it is. Not what I had planned but end result is the same, Giants ROCK! This adorable guy is Football Ian from The Greeting Farm Stamps. I think that Eli is becoming my second favorite QB of all time. HA! If he keeps beating the Patriots in Super Bowls I seriously might have to trade teams. NOT! But they are my second team in the NFL.
:0) Now for a funny story... 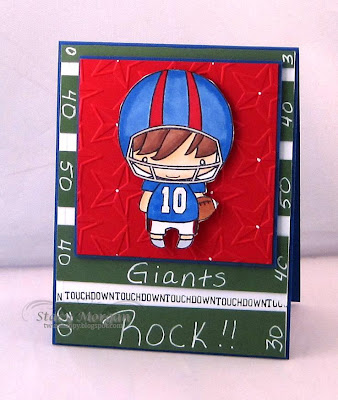 So if you follow my blog at all you know that I am a Colts fan and Patriots are my least and I do mean least favorite team. Keep this in mind for a moment and we will come back to it. You know the show NCIS? My favorite show that DH and I watch every season. This week's epidsode was interesting as it was a "What if" sort of senario. As in what if you choose differently how would things turn out. So this got me to thinking and then asking DH what would happen if we didn't get married. Where do you think you would be? I know dangerous question but interesting still the same. His first response was "Hopeless and lost without you honey" yea right, seriously. He then said " Well not sure really. I might have gone to a different college, maybe the college where Brady went. We would of hung out and you never know roomed together" As he is laughing at his funny remark. I socked his arm and said "I would rather you have said married to a Victoria Secret model on some island in the bahamas. That is blashemy in this house! " HA! Funny isn't he. Anyways, this NFL season is over and with a bang if I do say so. Looking forward to this fall. These *anaylists* that keep talking about Peyton Manning and what not are starting to irritate me. They are going to eat their words come March! :0) Have a great day!

well you know how I love this card!! and the season!!

Too cute :) Love your story too. Must have a back up team to cheer for, right ;)

Oh Stacy, you are soooo sweet!!! You were cheering for my NY Giants?? awwww you are too nice. I can now forgive you for last year's endless ranting about the Green Bay Packers. 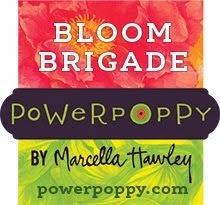