Happy first Friday in 2014!! We want to extend our best wishes to each of you for the New Year! Since this is the Friday before Flourishes new release, you are probably wondering where our Pre-Release Challenge is? Well, we decided to let the Friends of Flourishes gals run this month's challenge! Be sure to tune in next Tuesday and play along with the Release Week Timeless Tuesday Challenge! We'll have three winners that week for the FULL release! Play along as many times as you want for multiple chances to win!

The first of the year the request for cards is usually thank you cards from the girls at DH work. I grabbed Apple Of My Eye for this thank you card. The apples are stamped onto Classic White card stock using Memento Tuxedo black ink. 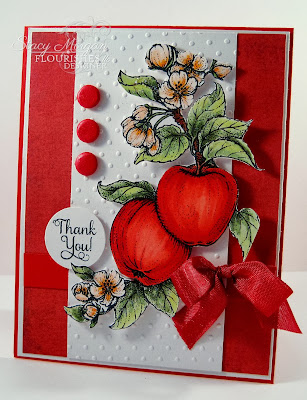 A hint of orange coloring on the apples was a mistake that I think turned out rather nice don't you? After they were colored I simple detailed cut around the image. You don't have to do that if you don't want to as we have a Silhouette Cut file for Apple Of My Eye. Added dimensionals to the back to pop them up and then some sparkles to the leaves. The first of the year christmas challenge is new from old. Dust off the old things and make them new again which I have had a lot of fun with this week. One thing I dusted off were the Candi (large enamel like dots in the corner) that I really like as accents. So be on the look out for several creations with these. I have the bug "again" for them now that they are dusted off. hee hee  Tied off a Color Made Easy Poppy Rancho ribbon bow and voila!

Now for some fun today, the Flourishes Senior Design Team has a bit of beautiful variety to show off. Some of the team got to play with Becky Fleck’s new round of January Sketches at PageMaps and others on the team are going to surprise you with some of their own creativity. Join these lovely ladies for some fabulous inspiration to kick-off your New Year!

Gorgeous card!! I love the layout and eye catching apples!

wow, this is gorgeous and the coloring is fabulous.

Oh Em Gee! This is AMAZING Stacy! I am in love with your richly coloured apples... WOWSERS! This card card screams... "eat me"! LOL... and that's a good thing :) Delicious!

Perfect coloring in those apples! Your card is a beauty!

Wow! Look at all that gorgeous red! This is an eye popper. I love red, love this card!

What perfectly colored apples.Love your design and sweet red ribbon. :)

Stacy this is gorgeous! I love how the blocked layout accents the pop of the apples!

Wowzers -- your coloring on this one is off the charts pretty! Love the layout you used too -- just perfect! :-)